“As of today, in Pays de la Loire, you can drive on water and wind.”

Nantes, 1 October 2021. This Thursday, Lhyfe, a world pioneer and pure player in renewable green hydrogen, inaugurated its first production site in Bouin (Vendée). It is the first in the world to produce renewable green hydrogen using wind power on an industrial scale, and this the first of many such sites to come, since Lhyfe has already confirmed some sixty or so projects throughout Europe.

To support this rapid growth, Lhyfe raised funds for the second time in its history, securing 50 million euros in a Series A financing round and welcoming SWEN Capital Partners and Banque des Territoires onboard alongside its original investors.

The funds raised will go towards supporting Lhyfe’s development in France and abroad, through the strengthening of its teams and the funding of R&D and new projects. 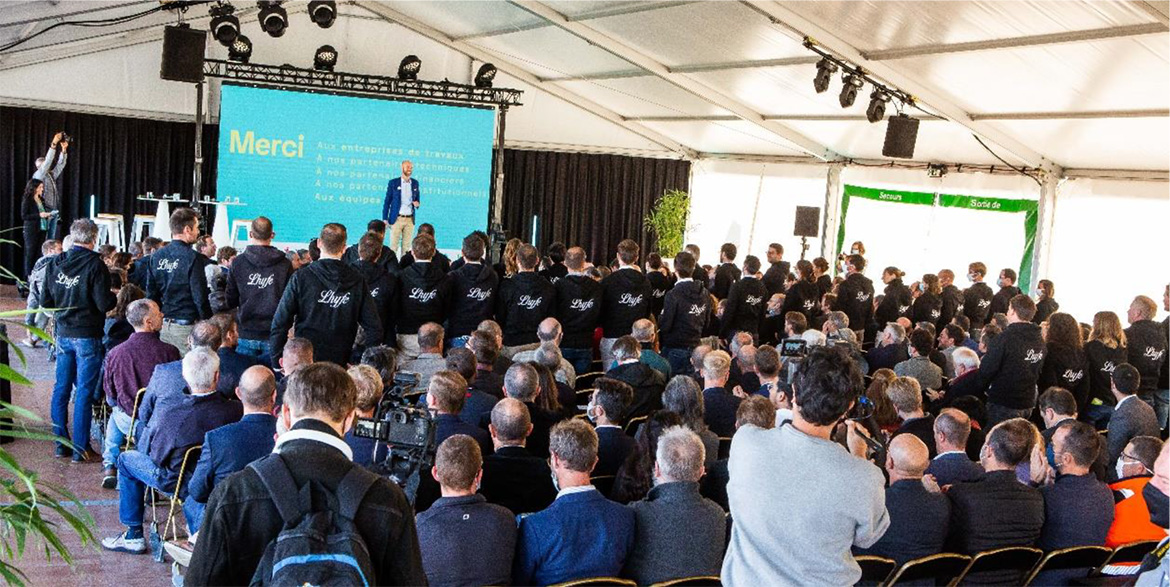 Lhyfe, a pure player in ecological hydrogen with global ambitions, produces and supplies green and renewable hydrogen for mobility and industry. Its production sites will at last provide access to ecological hydrogen (real carbon-free hydrogen) in industrial quantities and make it possible to shift to an energy model geared towards environmentally friendlessness and local – rather than centralized – production, while offering extremely competitive prices compared to fossil solutions. Those who really want to abandon fossil fuels now finally can.

Lhyfe and its partners inaugurate the Bouin production site: a major technical achievement and a world first

A few metres from the ocean in Port-du-Bec in Vendée, Lhyfe is now producing the first renewable green hydrogen in the world made using an electrolyser powered directly by wind turbines, and in industrial quantities (up to a tonne a day) – which represents a major technical achievement.

The site currently produces 300 kilograms a day, but will ramp up to a tonne a day in the coming months. Lhyfe’s hydrogen will supply four refuelling stations in western France including La Roche-sur-Yon, which will be operational in the next few days. Some fifty or so heavy vehicles, buses and refuse collectors will be powered by renewable green hydrogen in Loire-Atlantique, Sarthe, and Vendée at first, then in other French departments, under the VHyGO project in particular.

In addition to communities, Lhyfe will soon reveal the names of other operators that it will be supplying, in sectors such haulage, logistics and industry, which are also seizing the real decarbonization opportunity that its hydrogen offers.

Capitalizing on the know-how developed for the construction and commissioning of this first industrial site, Lhyfe is duplicating this site and, in parallel, deploying facilities with larger-scale production capacity to meet local needs (up to 100 times higher capacity in Denmark).

Lhyfe’s first R&D centre, adjacent to the production site, is dedicated primarily to optimizing its production process and to offshore development work. It is already prepared to produce hydrogen at sea, through a first renewable hydrogen production demonstrator that will be implemented in a few months off the coast of Loire-Atlantique.

This site was co-financed by the Community of Communes of Challans-Gois, the Pays de la Loire Region, Bpifrance, built jointly with local stakeholders from the Vendée department.

Matthieu Guesné, CEO and founder of LHyfe said: “A year after laying the foundation stone, we are extremely proud to be launching this site, which is symbolic of course for us, but also for what it represents for energy transition. Our gratitude goes to our five initial partners, who have made this “mad” project to change our energy model possible. Now we have succeeded this first step, we are ready to move faster.”

This second €50 million fundraising round, from SWEN Capital Partners, Banque des Territoires and its original partners, will allow Lhyfe to put €30 million into strengthening its deployment and R&D teams, in France and abroad. Lhyfe currently employees 60 staff and shall double this figure during 2022.

The company already has teams in France, Germany, Belgium, Denmark and Portugal. These will be joined in the coming weeks by new teams in Sweden, the Netherlands, Spain and Italy.

On the R&D front, production from offshore wind turbines will be accelerated, with the implementation of the first hydrogen production demonstrator at sea, at the SEM-REV offshore pilot site, off the coast of Le Croisic from 2022, and the development of new projects.

Twenty million euros are also earmarked for the financing of Lhyfe projects – Lhyfe was launched in 2019 and already has a portfolio of 60 projects throughout Europe:

“We are proud to support Lhyfe in this major raising of funds through our SWEN Impact Fund for Transition and to leverage our joint expertise in renewable hydrogen. We have found people that we can trust, with whom we share the desire to support innovation and provide solutions for the development of a carbon-free industry and the emergence of a French industry base that generates jobs”, said Olivier Aubert, Managing Director at SWEN Capital Partners.

Emmanuel Legrand, head of the Energy and Ecological Transition department for Banque des Territoires said: “Renewable hydrogen is a priority of the recovery plan and a key issue for tackling the necessary decarbonization of our societies driven by more sustainable territories. Lhyfe, through its capacity for innovation and its responsiveness, makes it possible to address these issues effectively. Our support for the development of Lhyfe involves the implementation of the first site in Bouin in Vendée, and the Vhygo project, which is an excellent example of an area-based industrial system with promising prospects for all of western France.”

“We are proud to welcome important players such as SWEN Capital Partners and Banque des Territoires into our equity”, said Matthieu Guesné, CEO and founder of Lhyfe. “The commitment of SWEN Capital Partners to the environment shows that our ecological hydrogen production solution has the capacity to offer a more breathable future to our children. Banque des Territoires confirms the robustness, intelligence and potential of the Lhyfe model in France, for industry and communities.”

If you would like more information about this fundraising operation and about Lhyfe’s development strategy, please contact our press officer.

ABOUT LHYFE
Founded in 2017 in Nantes, Lhyfe produces and supplies green and renewable hydrogen for mobility and industry. Its production sites make it possible, at last, to source renewable hydrogen in industrial quantities and to deploy a virtuous energy model geared towards environmental friendliness. Lhyfe, which will soon have some 100 or so staff, is a member of France Hydrogène and Hydrogen Europe. The company raised 70 million euros in funding between 2019 and 2021 and will inaugurate its first industrial green hydrogen production site in a few days’ time.
www.lhyfe.com

ABOUT BANQUE DES TERRITOIRES
Set up in 2018, Banque des Territoires is one of Caisse des Dépôts’ five areas of expertise. It brings together within a single structure all of our in-house expertise for local areas. As a one-stop shop for customers, it provides bespoke solutions in terms of consulting and financing through loans and investment to meet the needs of local authorities, social housing bodies, local public undertakings and the legal professions. It has been set up to serve the interests of all local areas alike, from rural municipalities to large cities, with the ambition of combating social inequality and territorial divisions. Banque des Territoires is also rolled out across Caisse des Dépôts’ 16 regional managements and 37 territorial offices so as to resonate more meaningfully with our customers, in their neighbourhoods.
For more attractive, inclusive, sustainable and smart communities.
www.banquedesterritoires.fr|@BanqueDesTerr

ABOUT OVIVE (GROUPE LES SAULES)
Les Saules is an independent holding, investing in and backing entrepreneurs in the waste and energy sectors. Building on its experience from historical companies, Les Saules brings an entrepreneurial and operational vision to the companies it is funding. Amongst the companies Les Saules invested in, we count: Lhyfe, Ovive, Mobipur, Optyma, Waga Energy, Tryon, Adionics...
Ovive is a reference actor within the industrial wastewater and landfill leachates treatment.
For more than 20 years, Ovive has been designing, building and operating treatment plants in France and worldwide, taking part in the protection of our rivers and water resources every day. With more than 130 plants and 10 agencies in France, Ovive is a company anchored in the territories.

ABOUT OUEST CROISSANCE
Ouest Croissance is a private equity company of three Banque Populaire banks (BPGO, BPACA, BPVF). Since its creation in 1987, it has supported more than 500 regional industrial and non-industrial SMEs in 32 departments of central, western and south-west France. Ouest Croissance assists the managers of high-performance companies in their growth, capital reorganization or transfer projects by providing financing expertise. With assets of €200 million, 100 active investments and an investment ticket of up to €10 million, Ouest Croissance acts as a close, reliable and lasting partner.

ABOUT VENDEE ENERGIE
The semi-public company (SEM) Vendée Energie has been a local renewable energy producer since 2002. Set up by the Vendée energy network operator SyDEV with public-private capital of €10 million, Vendée Energie is incorporated as a Public Limited Company (SA) with a public service mission.
With a consolidated turnover of €13 million, Vendée Energie currently operates seven wind farms (58 MW) and 60 photovoltaic plants on roofs and on the ground (30 MW). It is also supporting the development of several agricultural methanation units. On the strength of its experience, Vendée Energie has today diversified into the production and distribution of green hydrogen and BioNGV and is thus working across the entire value chain. Vendée Energie promotes a local supply chain, with green electricity and gas produced directly by local economic operators.

ABOUT OCEAN PARTICIPATIONS
Created in 1988, Océan Participations supports companies in their internal and external growth, with takeover and transfer projects, and capital reclassification. It acts as a strategy facilitator, across all stages of the business life cycle, with respect for autonomy as its key principle. As a local partner of 105 regional companies with assets of €109 million, its raison d’être is to keep wealth and decision-making centres in our region. Its full affiliation with the Caisse Fédérale du Crédit Mutuel Océan (head office in La-Roche-sur-Yon) ensures it a secure financial base, to provide long-term support, with confidence and without liquidity constraints.